Skip to content
Once again, I am sitting on a railway station, waiting for a train. Just that this time it is not Kanpur or Delhi, but a station called Lille Flanders. Yes, it is a great feeling- just to think of my location – Lille, a small city in the Northern France, in Europe. I can almost visualize a line moving from the congested lanes of Varanasi to these swanky roads of Lille, like in those Google maps. The train to Tournai (Begium) will arrive in a few minutes. Most people are into visiting the famous places and tourist spots and completing the ‘things to do before you die’ checklist, and I am no different. But what gives me real satisfaction is living at a place, being a part of its daily routine and trying to understand its systems and culture. That is what I am trying to do here, in these three months, or so would I like to believe. Add to it the country hopping times like these, and can almost hear the Illahi track (YJHD) playing in my mind!

As the flight had started losing altitude, I had started looking for the iconic structure towering through the clouds, but all I could fathom were some patterns of roads, buildings, fields and lights. Maybe the airport was located in extreme outskirts of the megacity. The flight landed with a thud and as it ran on the runway, a startling sight was that of the runway and public roads intermingled  casually. At places, vehicles passed under the runway, i.e. there were roads underneath the runway, and at places there were roads sideways at a lower level so that the wings of plane almost covered the vehicles. As we came out of the plane, a pleasant wave of cold air welcomed us to the Charles de Gaulle Airport, Paris, France. The Eiffel tower was (and is) yet to be seen though. The airport had a delightfully good smell all around, and though it looked spectacular, our very own T3 of the New Delhi airport wouldn’t pale in comparison either.

The train has left for Belgium, with me of course. I am in the Euro rail! Cheesy as it might be, it suddenly reminds me all DDLJ, the iconic scene, and so many Bollywood romances based in Europe and the trains. The view outside is beautiful, with organized patterns of fields, trees, villages and farms. I get to see some cows after a long time.

We rushed to the interconnected metro station after collecting our baggage, as the last train towards our destination was in a few minutes. It took us a few more minutes to understand the ticketing system. We had to buy the tickets for 9 euros per person, despite having the Eurail global pass. (It comes with a lots of strings attached, we realize now) After some inquiries from a few strangers (including a really hot and pretty girl, who giggled after answering, only adding to the effect) we were at the platform. Again, the station was very impressive and spread across multiple levels.  With each step, my respect for and pride on the Delhi Metro only increased, as in no way was it  any lesser. The train was a few minutes late (so it is not just us Indians, I thought almost with a smirk). The platform looked old and worn, nevertheless clean. The train did not look old though, and had a very classy look, on the exterior as well as interior. It had 2 floors and we went on the upper one. There were seating arrangements, and though I did get a window seat, there was only darkness to be seen through the glass. Below my seat were some leftovers of cookies and chocolates on the floor, probably by the previous occupants (again the smirk).

This park in Tournai is really a good place to write, with pigeons, fountain, and trees all around. I have no intention of visiting the famous places of this city today, as I will have enough time for that. (also because of the Eurail pass which made the travel free) Today was just a manifestation of the desire to set feet in another country, so Belgium. The chocolates can wait. 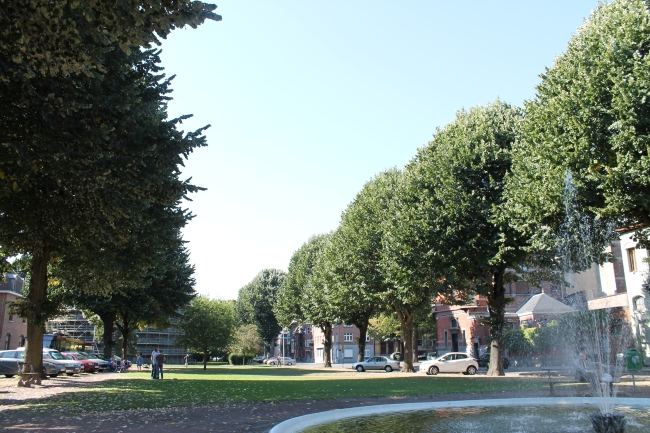 After an hour, we were on the station called ‘Lille Europe’. At first sight, it reminded me somehow of Platform 9 ¾ , with all its European style signboards. We walked out to a sprawling sight of a few tall buildings (Hotel Novotel being a familiar name), and roads with lots of painted arrows and symbols, and wide pavements. We went to the taxi stand and joined the queue, which was more of a mutual understanding than an actual line. It was 11:30 in the night and quite cold, so we had to put on a sweater. We decided to take cabs since there was too much luggage. After the first one left, we had to wait for long as many cabs refused to take that number of bags, even after our assurance that we would fit them all. Another issue was the language barrier. They hardly knew English, so we conversed in words and phrases instead of sentences. Finally, when we reached our place, the meter showed and alarmingly high reading of 22 euros, for each cab, which is about 3740 INR. Pricey times ahead, we were warned!

The house was on a very neat road with a number of homes in the lane, ours being the last one, near the traffic light. The door had a numeric pad and opened with a code which our landlady ‘Maya’ had told us. The flat has a room with high ceiling and lights hanging from above, living room, kitchen, washroom and a garden with a little swing. There are also a number of fireplaces, though not in use in the current weather. A number of mirrors around also add up to the charm.

I must have walked about 10 kms today, in the 3 hours of stroll along the Belgian countryside, with the soulful tracks of Madras Café and Udaan for company. The slow train seems really slow now. But the couple in the next seat surely doesn’t seem to mind the speed, given they are in no hurry to get off each other’s mouths. 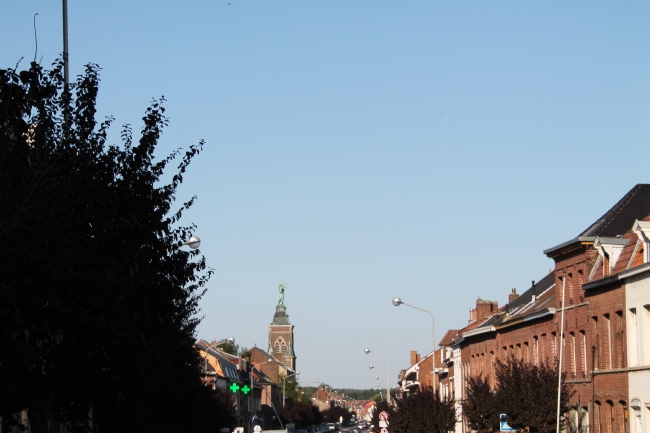 A travel of about 12 hours had made us jet lagged enough to drop asleep, but not without calling home. Though the sleepy voice on the phone reminded me that it must be 4 in the morning there. Funnily, it brought to my mind the title of a t.v. soap, which I could never really understand before – Des Me Nikla Hoga Chand!

Well, Pardes it is, for now. The dials and needles must adjust themselves,