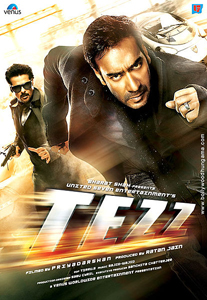 There is no other, less offensive way to say this, than it’s just plain bad movie-making. Infact, it is so bad that it is sad. Sad, considering that it’s the same maverick maker who has given Hindi cinema some of its most memorable moments in movies like Viraasat, Sazaa-e-kalapani, Hera pheri, Hungama, Hulchul or even a Bhool Bhulaiyaa. Coming from the National award winner film maker, the film is an assault on your senses, and begs for a lot of answers from the makers.

1) Remaking your own south movies is fine, but how could you not acknowledge or give due credit to the endless Hollywood movies the movie so blatantly derives ‘inspiration’ from? (or shall we say copies from) A bomb on a moving train and threatened to be exploded if the speed falls below a certain limit. Really now!

2) The reason behind the entire operation is lame, and on a serious note, irresponsible and principally wrong. Is the movie trying to say that illegal immigration is okay, and working without a work permit is justified? So the guy (Ajay Devgn) is thrown out of the country for not having completed the legal requirements for work and stay, and to avenge this, the man plants a bomb on the train. And the makers expect us to be sympathetic towards him. Really?

3) Et tu Priyan? Okay, slow-mo Matrix like action was cool for once. And twice. And thrice. And more. But now that its been done to death by our own films, they expect us to clap at the shots of aging actors’ close up in slow mo fist fight. Seriously now!

4) Why would a south Superstar, (Mohanlal) albeit aging, appear for a few minutes for an inconsequential role and that too without a proper character introduction or culmination, is beyond any logical explanation.

5) We understand the need of making the movie mass friendly, and hence the need for language barrier to be overcome. But is that enough to justify that every other person, whether it’s the driver to train controller to police inspector or a random garage guy speaks fluent Hindi, irrespective of the fact if he is an Indian or not? Really, are we believed to be that dumb? Don’t we have something called subtitles?

6) She has just about two to three scenes of dialogues. But even in those the wife (Kangana) manages to scare the hell out of you through her weird pronunciation and ghastly make up. Though with ghastlier lines to mouth like ‘Is aakash meein bhi ek kash hai, kash tum mere hote, its not completely her fault. But really, is this the same actress we saw and loved in Gangster, Fashion, and Wo lamhe?

In any case, if you are in dire need of a reason to watch this movie, Sameera Reddy does provide you some thrill with her bond girl looks, and some cool stunt scenes of 15 mins before the intermission.