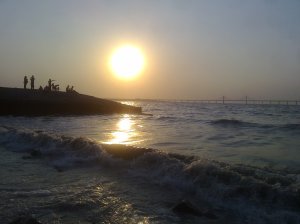 Call  me a romanticizer  , an exaggerating narrator, or just an obsessed victim of the legends associated, but Mumbai has already begin casting its spell on me.

Bollywood no doubt has played the greatest role in creating this metaphor of a city called Bombay, or Mumbai in the minds of most Indians- the city of dreams, Mayanagri, the spirit of Mumbai and what not. And hence as a first timer, the mind piles up all the memories, or rather impressions that it has formed over time. Having arrived from Varanasi to Thane station, received by my Uncle in the evening, my Mumbai Diary begins on 6th Jan,  9 a.m. when I leave for the institute (BITS Pilani) office, with him on his bike.

The Mumbai Heights! Okay…this might be the small town effect on me, but the high rising buildings never cease to amaze me. And if I thought Delhi had the heights, I had to rescale my vision. The thought that somewhere among these towers must be residing the stars themselves was enthralling. An Aishwarya Rai taking a nap in her room , or a Shahrukh khan reading a script between one of these walls,  Oh Dear Lord! As if reading my mind, the signboard just ahead read ‘Filmcity’ 10 kms. FILMCITY! How  many times I must have read of this place, where so many stories take place, are brought to life! And here was the road to it. But not now…sometime later. The signboards also started displaying all the familiar names- Andheri. Bandra, Santa Cruz- the names which I am sure all of us must have read so many times, mainly at the end of our favourite t.v. shows in the 90’s , for sending our suggestions or answers. (Since it was the pre- email age)  Me it reminded of Surabhi- the Renuka Shahade show to whom I must have sent so many letters, only to my dismay.

The double decker bus!   It suddenly brought me out of my thoughts. It was one of the early images associated with Mumbai in my mind, as I remember owning a toy double decker and asking curiously when I would see I real one. 21 years, and a half, who would have known!  Though to my disappointment, it was the only sighting of it throughout the day. Wonder why!

As I was nearing my first destination, I had the opportunity of talking to a localite for asking the way. Though I was sure that most people here would know hindi, yet I wanted to eavesdrop on some roadside conversation, or to listen to some group of playing children,  to check the lingo. But the office was reached before I could do that. It was in a huge, but unimpressive building.

After my registration, along with a PS (Practice School – The internship program, my purpose of Mumbai visit) mate, took an auto and reached the Andheri station to experience another Mumbai thing- the Local. I am sure I wasn’t half as excited as this while travelling on the metro train for the first time. The Mumbai Local- its like a cultural reference point. So many movies, t.v. shows , stories of the crowd in it- are a part of the talks. Just a couple of days before coming here saw a news story called ‘Local Ke Lafangey’ (on India TV- where else!) about those who hang dangerously from the crowded trains.  It wasn’t that crowded, and even got a seat. The crowd is huge at the wee hours- of schools and offices, my friend told me.  The crowd did increase a lot later. There were people of all types, Kids to old men, from poor ones to the sufficient ones.  And ofcourse, the beggars, some with a crying kid, when they themselves were a kid.  It reminded me of the scene from Slumdog Millionaire where Saleem tells Latika- Rota hua baccha yaani triple daam. Boyle certainly wasn’t exaggerating the facts. The local also showed what I was expecting to see sooner- the Slums.  Extending alongside dirty water flow, sewage drains, the desolate people- all what slums stand for, was there to see from the local travelling magnificently over the flyovers, with the other local running below.  A thought provoking sight was that of the slums and the skyscrapers in the same line, though obviously separated by walls, visible as well as invisible. Suddenly somebody spotted a bag lying on a seat sans an owner, and started asking people about it. For a few moments tension prevailed with people planning to give it to the police at next station, and then the owner returned with a sheepish face and was welcomed with choicest of names, though  most were in hindi only.

We deported at a station called ‘masjid’ and had to walk our way to the Tata Power office, through a lane of houses which I am not sure came under the category of slums or not. Interestingly most of the dwellings had a DTH dish installed on their tops. Another interesting sight was that of a dog being constantly disturbed by three cats while having his food, where neither of them was backing up or overpowering the other. The Tata Power’s gate had this huge note- BEWARE OF DOG, hesitatingly we went inside, only to be welcomed by a small whilte cat. Mumbai Myths, anyone?

The office was as expected- big, state of the art facilities, though unexpectedly had some really pretty faces at work.  Expectedly, but sadly, we were informed that civil and mechanical guys will be posted not here, but at the power plant located in outskirts of Mumbai.   So me and my another PS (Practice School) mate from Goa Campus (Anshuman)  left for the place on a taxi. A not so flattering notice made by me was that all the gaurds and  taxi drivers I had met till now were from U.P. or Bihar. Hmmm. I asked the driver about Underworld. What did it mean to him, or an average mumbaikar. All he had to say was 26/11. Apart from that, he said, life was as normal as it could be. What? No shootouts, no encounters, no gangwars, he had seen nothing in his 9 years at Mumbai? No. well good for him, and all!  Meanwhile I collected my luggage from my Uncle’s home in Thane and then we set off for this place called Karjat, which meant covering more than 50 kms of Mumbai, Thane etc and that meant some eye widening beauty of concrete and current!  Some beauties are more addictive and appealing at night, and the city is definitely one of them. Unlimited twinkling spots of lights rising high, the flashing neon screens, the fancy hotels, malls, multiplexes, bars with names no less glamorous! Just kept on adding to my to do list while at Mumbai.  Another surprising sight was that of the mountains arising out here and there frequently in the city. I had never associated this with Mumbai in my mind. But as we neared our destination, the place started becoming more and more mountainous. Then I assumed these must be the part of western Ghats.

Finally arrived at our destination, our home, for next 6 months, after a day at the economic capital of the country.  I know, this was nothing but just a wave of a sea which is all open to explore, if only 6 months were enough for that, or any amount of time was. And literally too, it is yet to be seen, the most important metaphor of the Life in this metro- the Arabian Sea.

While having dinner, I asked the guard of the home, ‘’what time is the last local’’ ? before he could answer, Neha dhupiya and Abhay deol jumped dancing  in the t.v. screen with the footer of screen reading Movie: Ek Chalis Ki Last Local.

The diary has just begun.